There is no doubt, Florida is one of the most popular holiday destinations in the world.  Estimated to attract over 1.5 million UK tourists each year.  Situated amongst the southern states of the USA, Florida hosts a huge variety of tourist attractions.

With more than a dozen theme parks, Orlando in central Florida has all you need to keep the whole family entertained and to enjoy quality time together.

From adrenaline-fuelled rollercoasters at Universal Studios Florida to film sets, aquariums and water parks, the ‘Sunshine State’ really does have something for everyone.

Hiring a car in Orlando, Florida

Many find that the easiest and most flexible way to travel to Orlando’s must-see attractions is via a hired car.

You’ll find that Orlando’s car hire companies are grouped together on the ground floors of Terminal A and Terminal B at Orlando International Airport – Enterprise, Avis, Hertz, Firefly, Budget and Thrifty are among the car hire firms in residence.

You’ll also find car hire firms across Florida, and in Orlando itself, that can meet your needs.  Depending on what your Orlando hotel offers, you may need to pay for overnight parking for your hire car – check in advance to see whether this is the case.

Note that the main driver will need to be at least 25 years of age. A handful of Orlando car hire firms do rent to younger drivers, but such a hire will usually cost more.

We at Questor Insurance recommend that although some rental companies do not require you to possess an International Driving Permit, it would be a good idea to apply for one – just as a precautionary measure.

Applying for an IDP

As a UK citizen, you are not permitted to apply for an International Driving Permit until 3 months before your trip and you must be 18 years of age upon application.  At the Post Office, you will need to fill out a form in person.

If you do decide to hire a car during your travels, remember to also consider purchasing car hire excess insurance. You will often find that comprehensive excess cover is much cheaper to buy through Questor Insurance in comparison to an excess waiver offered by the car hire company. To find out more about car hire excess insurance and how this protects you against additional car hire charges, just click here.

Other Modes of Transport

The SunRail commuter rail service runs from north to south in Orlando but does not stop near to any of the main theme parks. Amtrak serves Winter Park, Kissimmee and Winter Haven (the latter of which is home to Legoland) and provides an alternative route into Orlando if travelling from elsewhere within the United States.

The Lynx Bus also makes regular airport pick-ups and drop-offs, roughly every 30 minutes on weekdays and hourly at weekends – serving locations in downtown Orlando, Florida Mall, SeaWorld, and International Drive at a cost of $2 per passenger per ride. The bus network does not service Walt Disney World or Port Canaveral.

Orlando is served by Orlando International Airport (MCO), acting as a gateway to millions of inbound tourists on an annual basis.

Situated around six miles to the south-east of Orlando, the airport is a short drive from Interstate 4.

An Orlando airport shuttle service operates to hotels close to the airport and to some that are further away. These services also offer a shuttle from the hotel to Orlando International Airport, but you will need to book at least 24 hours in advance to organise the transfer.

If you’re planning a trip to the many theme parks or other attractions, it’s important to note what to expect from the weather.

Temperatures in Orlando peak in July and August, pushing 30°C, while January and December are the colder months, where temperatures average 15°C.

Extreme variations in humidity can mean Orlando’s weather is tough on holidaymakers, as high temperatures and thunderstorms are both common.

You can expect a minimum of 10 hours of sunshine between April and July, although rainfall peaks in July at 170mm when showers can be expected on two of every three days.

The best time to visit Florida is between September and November, as the weather in Orlando in September features notably lower humidity levels. 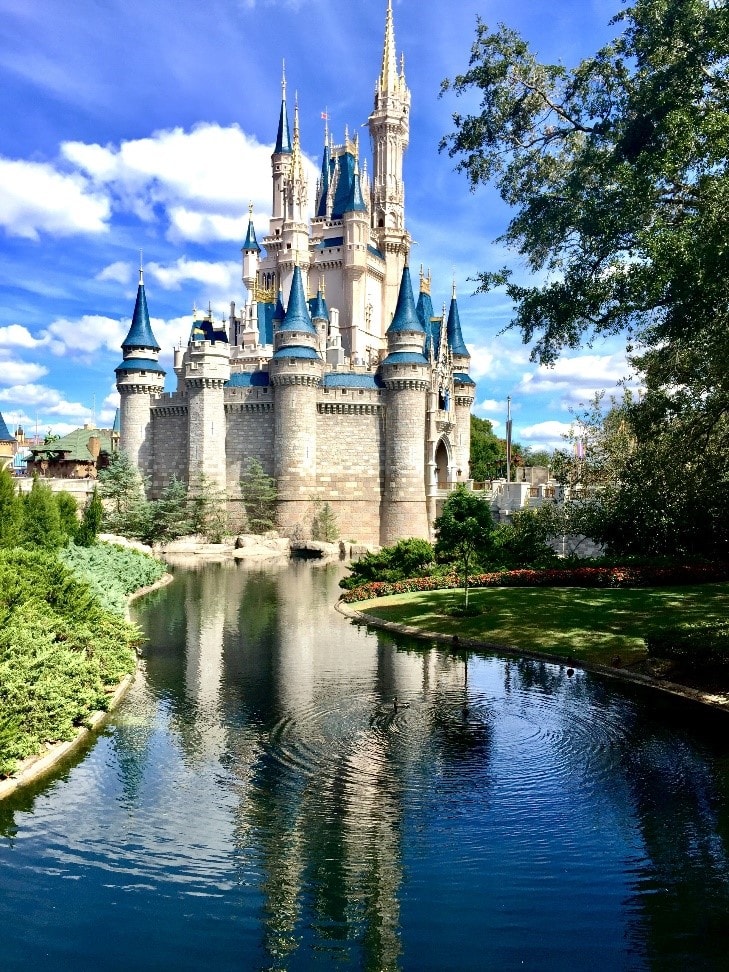 In Magic Kingdom, revisit the classic Disney films that we all know and love. With a range of water rides, roller coasters and off-the-scale castles, Magic Kingdom is the ideal place to celebrate Disney’s best known stories.

Animal Kingdom provides the opportunity to explore the jungles across the world and (new to Disney World) you can explore the world of the incredible film ‘Avatar’!  With thrilling roller coasters and extraordinary animals, Animal Kingdom offers something for everyone.

Hollywood Studios is the best place for all the movie fanatics providing the opportunity to explore famous films throughout the eras from the early 20th Century through to the modern day. A must for any Star Wars fan!

Experience ‘the world’ at Epcot as well as outer space and under the sea!  With a variety of futuristic rides, Epcot is the perfect place to let your inner-explorer flourish.

Florida is also home to a variety of water parks such as Sea World and Universal Studios’ Volcano Bay. Fancy swimming with a variety of marine wildlife, such as dolphins, manta rays and even sharks? Then a trip to Discovery Cove is a must. SeaWorld Orlando is also home to an abundance of sea life including whales and dolphins.

It’s not just about Walt Disney World, read on to discover more about Orlando Florida and the many attractions and sights you may want to explore:

After an exhausting few days exploring the parks, you might just want to relax on one of Florida’s beautiful beaches.  In the south of the state, beaches in Miami and Clearwater are perfect for a bit of rest and relaxation.  With warm, turquoise waters and talcum powder-like sand, these beaches will have you feeling like you have landed in paradise. You’ll also find an array of beaches in Orlando that offer golden sands and a chance to top up your tan.

Renowned as one of the USA’s major tourism regions, Orlando is packed with places to eat, drink and immerse yourself in culture. The best Orlando restaurants can be found in Downtown, where you can find award-winning eateries serving up everything from pizza and pasta to burgers, steak and sushi.

We hope you have found this travel guide useful. For more travel related advice, take a look at the blogs and news articles in our social hub. Or if you are looking to book a holiday to Orlando, the experts at Questor Travel will be happy to research and book your trip.

May
13 -What influences your motorcycle insurance costs?
13 -Tackling high insurance premiums for young drivers
27 -What to consider when purchasing a new motorcycle
27 -Getting to grips with an automatic hire car

February
10 -Why planning for summer car hire starts now!
11 -Car hire costs around the world revealed
24 -Best destinations to visit in the Easter holidays
25 -Where are the most popular winter holiday destinations for Brits?
25 -How much can you save by booking car hire in advance?

2019
December
10 -What risky destinations should you avoid in 2020?
10 -How to perfect the art of holiday packing
10 -Which? reveals common car hire bad practices
10 -The pick of National Geographic’s must-visit destinations for 2020

June
03 -Hiring a car in Europe? Do you have the paperwork completed?
03 -Ultimate road trips – Route 66, USA
11 -How to take the best holiday photos
14 -Unexpected charges continue to frustrate car hire customers

April
01 -How much it costs young drivers to get on the road
01 -Why you need a credit card to hire a car
04 -What is a Car Club?
04 -Why you should always clean your hire car
04 -The best short-haul destinations for May half-term
04 -Top 10 reasons to take a cruise
07 -Up the fun-factor with a hired car
16 -UK Family breaks and attractions for Summer Holidays
16 -The definitive car hire checklist
16 -How van hire is cost-effective for businesses
16 -Alicante Car Hire and Travel Guide
16 -Holidaying With a Home on Wheels

February
14 -Understanding ETIAS and what it means for European travel
20 -How can young drivers reduce the costs of car insurance?

2018
December
10 -What is winterisation?
17 -How to avoid ski holiday car rental extras
19 -Are you prepared for winter driving?

September
10 -5 Things to Consider Before Hiring a Motor Home
10 -7 Checks To Avoid Car Hire Charges
10 -Getting To Grips With Out-Of-Hours Car Rental
10 -Understanding car hire mileage limits
10 -Is naming an additional driver for car hire worthwhile?
10 -Be warned: Low cost might not always be best
19 -The Top 10 sites to see in Munich after Oktoberfest
25 -Idyllic Autumn Holiday Destinations

May
09 -Top 10 facts you need to know about GDPR
10 -Choosing a hire car that is right for you
14 -Can you help the environment when you travel?
23 -Exploring Australia by camper van
25 -European road rules you need to remember

April
01 -How can van hire be beneficial to businesses?
06 -Skyscanner boosts travel options for iOS customers
13 -Moving property – can you do it all yourself?
27 -The World’s Most Luxurious Honeymoon Destinations

February
16 -Bold plans to transform car hire in Balearics
20 -Could you enhance your Car Club insurance cover?
21 -Hiring a car for a late season ski holiday? Here’s what you need to know
28 -Understanding the latest car hire trends

2016
December
01 -Fleet Insurance
04 -Making Your Motor Insurance Cheaper
07 -Revealed: The best airlines for each cabin class
16 -Googles top holiday destination, as searched for by you
23 -Happy Holidays
28 -Where to spend New Year’s Eve in the UK

October
13 -Product Facts: Is there any excess on my policy?
03 -Airline Passengers Are Losing out on Compensation
03 -Questor Insurance Wins “Best Employer Award” at the UK Broker Awards 2016
05 -Business Travel Spend On The Rise
08 -Have you ever wondered how much falling ill abroad could cost you?
16 -Save money when renting a car by taking your own gadgets and accessories
24 -Most Unique Holiday Souvenirs

February
03 -Cyprus Myths and Legends
07 -You want a pizza me?
11 -Top Water Parks around the World
16 -Winter Gardens
17 -Clueing up on the Zika Virus
19 -Oyster and Contactless Ticketless Systems at Gatwick Airport
20 -Travelling Nevada
22 -Hospital Beds Are Costing More than Apartments
28 -Insuring Your Travels to the USA
29 -Leap Year Proposal Locations
29 -Leap Years - the reason behind February the 29th

January
02 -Gap Year Medical Claims on the Up
04 -Away For Business? What Shouldn’t You Leave Behind
11 -Maintaining Your Wellbeing on a Long Flight
15 -Top Smartwatches
28 -Top Business Apps
30 -Locking Down Your Apple Gadgets from Children

2015
December
01 -The top 10 Christmas Markets in Europe
04 -History of the ever changing passport
08 -Homemade Christmas
09 -Edible Christmas gifts – our top 10 recipes!
14 -Wright Brothers
16 -Money Saving Tips
18 -Don’t Drink and Drive This Christmas
18 -A forager&#39;s guide to enriching your winter larder
18 -Over 20 Million Travelling For The Christmas Getaway
21 -Top Christmas Driving Songs
22 -A guide to DIY Christmas tree ideas
22 -Petrol Prices Begin To Fall
31 -What does 2016 mean for you?

August
10 -A history of sandals – the ultimate gadget of the summer
12 -Exam celebrations
18 -Questor Insurances Top Travel Tech for your Travels
24 -Collision Damage Waiver or CDW… what does it really mean?
27 -Summer hits of the past centuries – one for each decade
29 -Travel Sickness costing thousands in missed flights

June
05 -Where to spend the longest day of the year
17 -Have your very own 007 holiday
19 -If camping is too adventurous for you, why not try glamping?
24 -To move or not to move?
27 -Wherever you go, take your manners!
30 -Unusual destinations in Europe for the peak of summer – away from the beach

February
03 -The nation’s favourite Chinese dishes!
11 -Travel tips for Couples
12 -Our top 15 romantic proposal locations across the globe
13 -My other half, my little cabbage, my flea…. All around the world we have different ways of referring to our loved one.
15 -Year of the Ram
16 -Around the world in 12 pancakes
26 -Top Travel Planning Apps
26 -Overseas Festivals In 2015

January
12 -Looking after your gadgets!
29 -Our top 5 unusual and interesting places to eat out in London